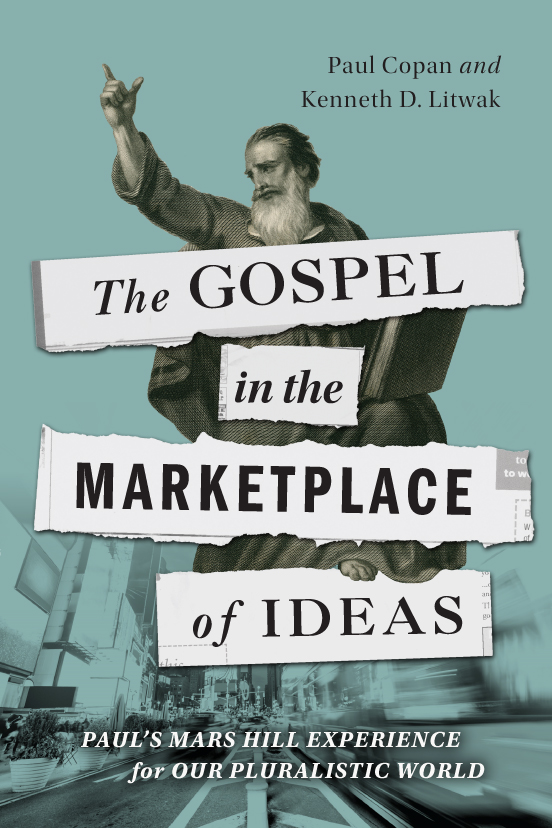 The Gospel in the Marketplace of Ideas: Paul’s Mars Hill Experience for Our Pluralistic World by Paul Copan and Kenneth D. Litwak – IVP Academic, 2014

Our world is multicultural, multireligious, multiphilosophical. It ranges from fundamental monotheism to do-it-yourself spirituality to strident atheism. How can Christians engage in communicating across worldviews in this pluralistic and often relativistic society?

When Paul visited Athens, he found an equally multicultural and multireligious setting. From Jews to Gentiles, elite to poor, slaves to slave owners, from olive-skinned Gentiles to dark-skinned Ethiopians—the Greco-Roman world was a dynamic mixture. Religious practices were also wide and varied, with the imperial cult of emperor worship being the most prominent. Many also frequented the temples for the traditional Greek pantheon, and participated in the secret rituals of the mystery religions.

Seeking to embolden the church’s witness in today’s society, philosopher Paul Copan and New Testament scholar Kenneth Litwak show how Paul’s speech to the Athenians (found in Acts 17) provides a practical model for Christians today. The authors encourage Christians to “be more biblically informed, culturally astute, and creatively engaged to winsomely challenge the idols of our time and to point contemporary Athenians beyond ‘an unknown God’ to the God and Father of our Lord Jesus Christ.

“Imagine Paul preaching in first-century Athens. Now imagine stepping into Paul’s shoes and proclaiming the gospel in the twenty-first-century Western world. In this thought-provoking book, a Christian apologist and a New Testament scholar join forces to read Luke’s famous story of Paul on Mars Hill, and the result is as compelling as it is remarkable. Copan and Litwak issue a robust invitation for God’s people to read Scripture and our increasingly post-Christian world together in the service of communicating well the good news.” —Joel B. Green, professor of New Testament interpretation, Fuller Theological Seminary

“Nuanced and well-informed on the biblical evidence, this book offers a sound biblical model for communicating Christian faith in engaging ways today. It rightly understands Paul’s Areopagus speech as a model, and translates that speech’s approach into analogous forms for our culture.” —Craig Keener, author of The IVP Bible Background Commentary: New Testament; professor of New Testament, Asbury Theological Seminary

“Copan and Litwak have produced a brilliant book that sheds light on the dynamic, turbulent intellectual climate that Paul faced in ancient Athens. They demonstrate why Paul’s teaching is as important and powerful in the twenty-first century as it was in the first century.” —Charles Taliaferro, professor of philosophy, St. Olaf College

We don’t have to wander far from our homes to realize that we live in a multi-cultural, multi-religious, multi-philosophical world. The fact is, it is quite probable that we will interact with someone of a different faith, culture, and/or worldview each day that we go out into the community around us. It is truly a pluralistic world.

We hear it often: “We’ve got to contextualize the gospel”—or something similar. Copan and Litwak aim to take Paul’s experience at Mars Hill (Acts17), and glean wisdom from it in regard to how we ought to approach our multi-everything world as followers of Christ. Having an undergraduate degree in intercultural studies, and having participated in cross-cultural mission trips quite frequently over the course of the last five years, this The Gospel in the Marketplace of Ideas stuck out to me when I stumbled upon it.

In the first chapter (really, more of an introduction), they introduce the topic as a whole, and build the need for the The Gospel in the Marketplace of Ideas: “[W]e need to know what non-Christians believe and be clear on the truths of the Christian faith and how to express them” (15). Litwak also gives his translation of Acts 17:16-34. Following that, in chapter 2, they approach the issue of whether or not this speech was a “mistake” on the part of Paul. That is, is the method he used at Mars Hill a method that he later scrapped. Copan and Litwak answer decisively, “No.”

In Chapters 3 and 4 (the most important chapters in setting up the rest of the book), they compare and contrast Paul’s Athens with our “Athens.” Paul’s Athens was a center for philosophy, intellect, and religion. That sounds familiar to us because of the vast amount of philosophies and religions that compete in our “Athens.” The concluding part of each of these chapters is a summary of influential ideas in Paul’s/our time. In Paul’s Athens, they make note of: Platonism, Epicureanism, and Stoicism. In our “Athens,” they summarize: postmodernism/relativism, emotivism, religious pluralism/syncretism, and naturalism/scientism.

Chapter 5 moves beyond cultural context to literary context—what can we learn about Paul’s speeches in the literary work of Acts. In keeping with Hellenistic historiography, we ought to expect that Luke has given us a summary/outline of what was actually said, rather than a woed-for-word speech. Alluding back to ch. 2, Copan and Litwak conclude that the very way that Luke portrayed the speech is enough to say that Paul was not using a mistaken method.

Chapter 6 moves toward discussing various audiences—first, Paul’s audience and their uniqueness, and then (briefly) the audience of Acts itself. Obviously, the audience is significant when talking about any speech. As Copan and Litwak point out: “The sermons recorded in Acts…are usually quite different from one another. Why didn’t the apostles give the identical message every time they spoke? They addressed different audiences in different situations, and so they shaped and crafted each sermon accordingly” (74).

Getting more into the speech of Paul, chapters 7, 8, and 9 essentially deal with Paul’s message, the presentation of that message, and the response to that message, with some application for us. For example: the need for “removing weeds before planting flowers” (97)—that is, clearing up incorrect notions of God before proceeding to present the gospel. These are some of the more interesting chapters, in my opinion. And finally, in chapter 10 we reach what is basically the “application chapter.” Of course, there is application elsewhere in the book, but this chapter seeks to display what we can really glean from Paul’s speech at Mars Hill to use in our “Athens.”

One of the central themes that I noticed was the defense of Paul’s evangelistic method in Athens. Obviously, since the entire point is what we can learn from that method! They conclude the book by giving a list of additional reading resources (several on worldview, and even more on evangelism and apologetics), as well as sets of discussion questions for each chapter.

This book is essentially what you would expect from a philosophy guy and a theology guy working together. There is a good mix of theology and philosophy, and that keeps things interesting. Tertullian (the church father who famously said something along the lines of “What has Athens to do with Jerusalem?”—or, what good does philosophy do for theology?) would disapprove of this book, but when it comes down to it, Athens has much to do with Jerusalem. As we have seen throughout Christian history, with the exception of Tertullian and some other like him, philosophy and theology are helpful for one another. Copan and Litwak even declare: “Paul could not have given this speech without a knowledge of Athenian philosophy and religion” (135).

Copan and Litwak find a good balance between the philosophical side of this particular periscope and the theology behind it. With a book like this, one runs the risk of focusing too much on one or the other, and I would say that that risk was averted.

Coming from the academic imprint of InterVarsity Press, it isn’t a book that I think would hold the attention of an average churchgoer. Churchgoer’s who enjoy philosophical thinking, pastors, and students will find it helpful though. The fact that we live in the multi-everything society that I mentioned above makes it important by default. It is a well-written book, sprinkled with points of application throughout, and it is a great look at contextualizing the gospel.

Unfortunately, I found it a little less gripping than I expected it to be. Perhaps that is because of the amount of talk regarding “contextualization” that we hear today. In that regard, I found myself thinking: “Yeah, yeah, I know…I just want to get to the point.” Regardless of that critique, I do recommend the book, and I think that the resources and discussion questions at the end increase the books value. I especially think, because of the discussion questions, that this would be a great book for a church small group for serious believers who are interested in the mingling of philosophy and theology within the context of contextualizing the gospel. 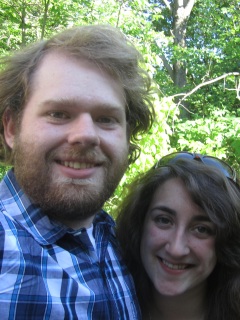 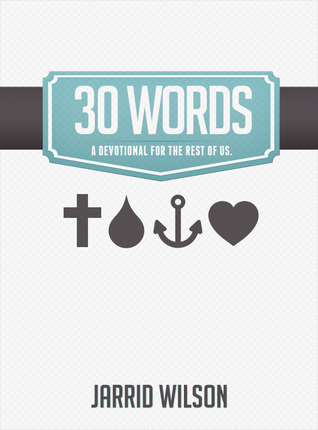 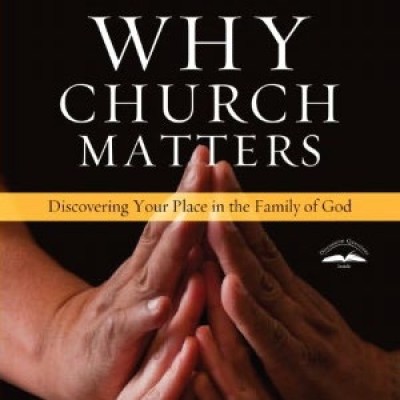 Why Church Matters by Joshua Harris 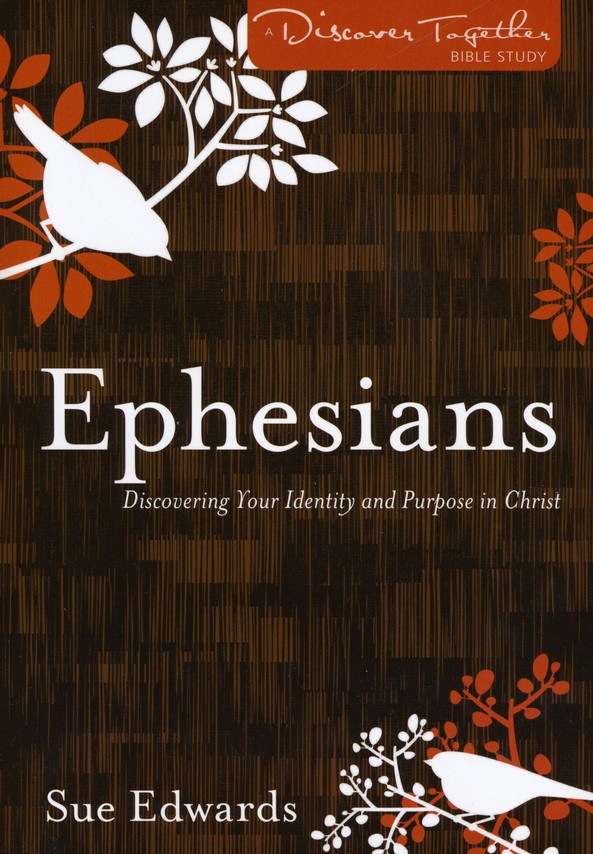 Ephesians: Discovering Your Identity and Purpose in Christ by @SueEdwardsDTS @KregelBooks