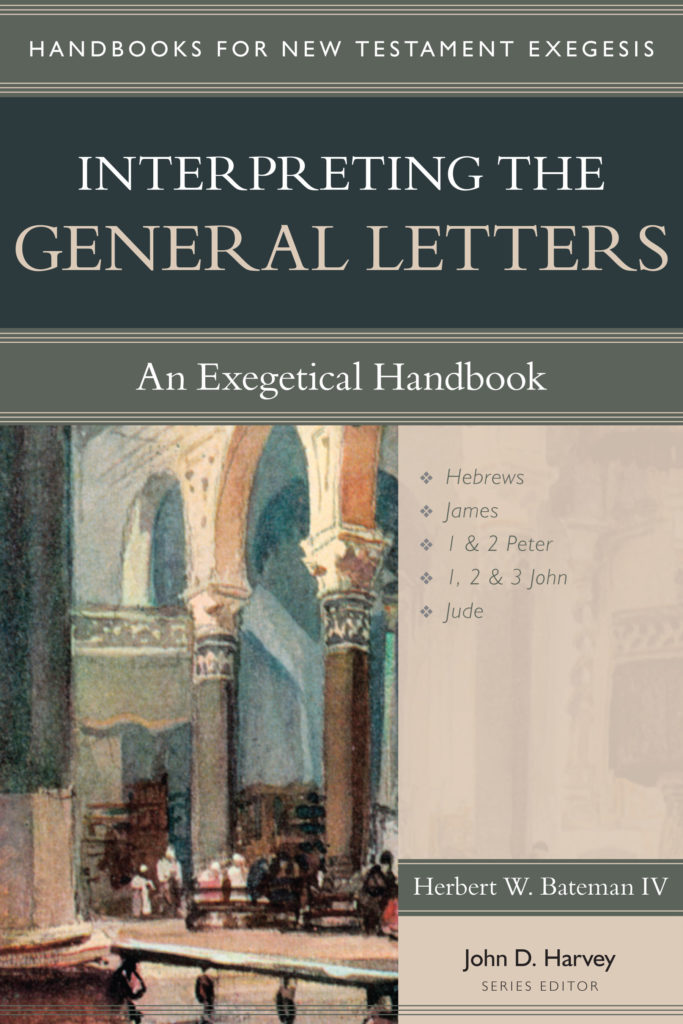 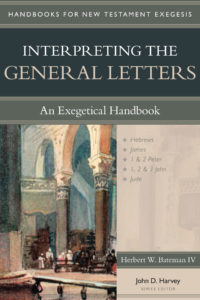 This handbook is designed as a step-by-step approach for analyzing and communicating eight letters of the New Testament: Hebrews, James, the Petrine Letters, the Johannine Letters, and Jude. Interpreting the General Letters provides important background material for these books’ interpretation by exploring the types and component parts of letter writing, the importance of an amanuensis; the historical background of the Greco-Roman world, and implications of each of these factors for interpreting the general letters.

Bateman presents a thorough process for exegesis of the Greek text of these letters, with examples and insights into the text that reinforce the value of doing the hard work of exegesis. This is a valuable introductory tool for students who are learning how to interpret the General Letters and a trustworthy guide for pastors. W. Edward Glenny, Professor of New Testament and Greek, University of Northwestern—St. Paul

Herbert W. Bateman IV (PhD, Dallas Th eological Seminary) has taught Greek language and exegesis for more than twenty years. He is the  Author or editor of many works on the General Epistles, includingCharts on the Book of Hebrews, Four Views on the Warning Passages in Hebrews, and a forthcoming commentary on Jude and 2 Peter.

Not that much of a summary is necessary, Bateman IV walks through the epistles known as the “General Letters.” Those letters include Hebrews, James, 1 & 2 Peter, 1, 2 & 3 John, and the book of Jude. Given that the majority of the New Testament is epistolary, Bateman first rightly lays the groundwork for interpreting letters (as opposed to historical or apocalyptic writ). Following his discussion of the Genre of the General Letters, Bateman speaks to the Background of the Letters (the Greco-Roman world, the Judean-Roman relationship to the letters, and appropriate implications for interpretation). Having walked through the genre and historical backdrop of the letters, Bateman journeys through what I believe is the most important of topics for himself – the Theology of the General Letters. I say that because, for Bateman, it is not the genre or the history that frames how the letters are to be interpreted and applied, the theological trajectory of the letters are of utmost importance. Bateman sets the General Letters in their theological, redemptive, Biblical place (i.e., Era of Promise in the Hebrew Scriptures, Era of Fulfillment in the General Letters, & the Individual Theologies of the General Epistles).

Even having journeyed through theological trajectories (from era of fulfillment to Jesus’ sacrificial death across epistles), Bateman provides more groundwork for those wishing to understand, teach, and/or preach the General Letters. The following is a nine step process to interpreting and expositing the text: Before teaching others, we must first get time wrestling with the Greek itself and Bateman displays important points in which to grapple with the Greek text itself as you Initiate a Translation (Step 1). Having distinguished the translation, Bateman provides a cursory discussion of (major) Interpretive Issues (Step 2) and Textual Problems (Step 3). Once you have prepared to interpret you can now move on to the three steps of actually interpreting the text: Interpreting Structure (Step 4); Interpreting Style, Syntax, Semantics (Step 5); Interpreting Greek Words (Step 6).

What concludes the book, which comprises of nearly thirty pages, is the exposition of the text found in the General Letters. Bateman provides two examples, one from Jude and one from Hebrews 10, in which the process is seen in full from interpretation to exposition.

My thoughts? Well my thoughts always boil down to whether or not this book is sound and whether or not this book is useful — and both point to a big fat YES. Kregel Academic is well known for producing wonderful, Biblically-sound material. And H. Bateman IV has been immersed in the world of New Testament exegesis for over twenty years. Not only is the material within the pages worth its weight in gold (and worth far more than many New Testament higher education exegesis courses on this subject matter charge you), but there is addition help on the books and subjects at the close of the book. The glossary, bibliography, as well as suggested commentaries and sources all point the studier to a deeper journey into the world of the General Letters. If you have an interest in digging into the General Letters, I would start the discussion here before moving on to exhaustive commentaries. The Handbook series as a whole is wonderful and this resource does not disappoint.

The Parables of Jesus Christ by Eric Brandon Roberts 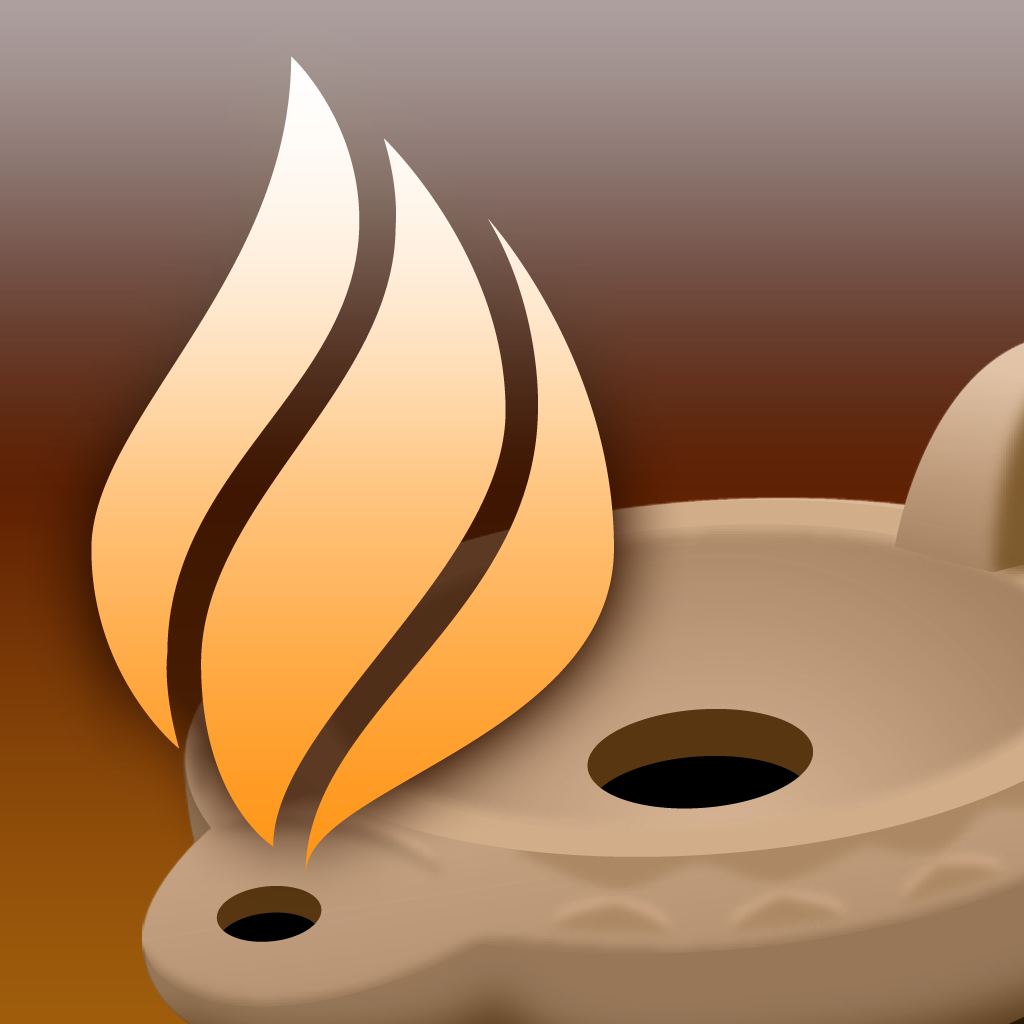 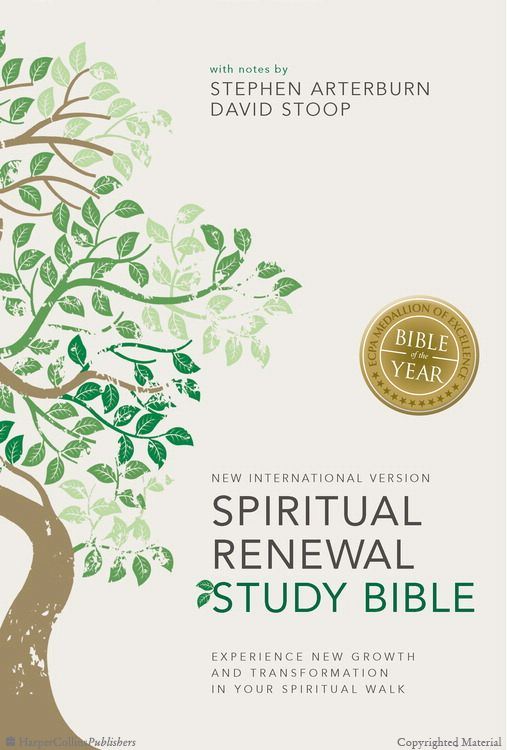